"Tony Bish made his reputation as winemaker for Sacred Hill in Hawke’s Bay. While he remains a consultant and a shareholder in the company, his interests have moved away from the direction that Sacred Hill have taken (they now have a large focus on Marlborough Sauvignon Blanc, and crushed 7000 tons last vintage in the region). Tony has turned to his first love, Chardonnay, and is now making a stunning range of wines from an urban winery in Napier.

He started his own project in 2013. ‘I began with what I knew I could sell,’ he says. The first wine was a $20 called Fat and Sassy, and it was a hit. The first vintage was 500 cases, but next year he’ll be up to 5000, and he’s protected the brand by not doing grocery and never discounting.

The impetus for going alone was a trip to South America with Rod Easthope and Warren Gibson. They’d all being discussing their ambitions on the trip, which solidified his desire to do his own thing. And meeting Alvaro Espinoza and seeing the results he had with locally made concrete eggs also piqued his interest.

So he began his own winery and also began experimenting with manufacturing concrete eggs, working with a local expert called Josh Winters. Now, using and selling concrete eggs is part of his business. They hold 1600 litres and cost NZ$14 000, which undercuts the imported rival Sonoma Cast Stone by $6000. ‘We are selling them across the country,’ says Tony, who says he has first-to-market advantage in selling and using eggs.

In pride of place in the winery is the Taransaud Ovum, a 2000 litre wooden egg. Tony’s yet-to-be-released Zen Chardonnay is the first Chardonnay in the world to have been made exclusively in an Ovum. The Zen Chardonnay is a profound wine that may be the best New Zealand Chardonnay I have tried." 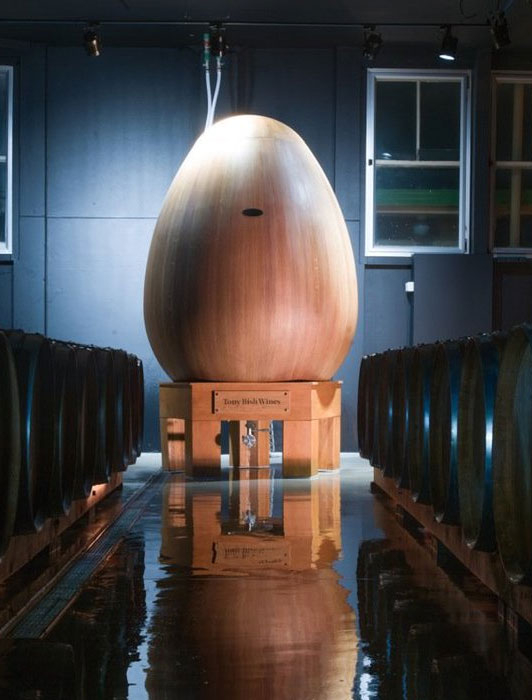